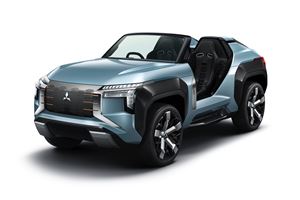 Gupta added that MMC plans to employ its electrification technologies to new midsize and compact SUVs by 2022 as well as Kei cars in the near future.

Mitsubishi Motors also presented the new SUPER HEIGHT K-WAGON CONCEPT at the show, announcing that it is the second wave of the next-generation Kei cars which it plans to release by the end of this fiscal year.

The Mitsubishi MI-TECH CONCEPT was built to be a small plug-in hybrid electric SUV that delivers unparalleled driving pleasure and confidence over all terrain. The MI-TECH name is constructed using the “M” from Mitsubishi and the “I” from Intelligent, Ingenious and Inspired, while the TECH is an abbreviation of Technology.

This new concept car embodies the MMC brand statement “Drive Your Ambition” with a compact and lightweight new PHEV drivetrain; a four-motor electric 4WD system and advanced driver-assist and preventive safety technologies, all packed into the small electrified SUV.

Under the concept of “Stimulates the driver's adventure”, the design of the Mitsubishi MI-TECH CONCEPT is that of a dynamic buggy-type vehicle which embodies the very essence of Mitsubishi-ness. The front end adopts MMC’s signature Dynamic Shield new front design concept and uses a satin-plated colour in the centre of the grille, with copper as a secondary colour to accentuate its expressiveness as an electrified vehicle. T-shaped headlights are embedded in the front end to emphasize a distinguishing outward appearance. On the lower bumper, an aluminium skid plate is placed on both sides to protect the body while the centre section has an air intake.

On the sides, the highly raised over-fenders and large diameter tyres project a high level of mobility, SUV power, as well as the stability to thoroughly grip the terrain. The body radiates grandeur and sharpness with a design reminiscent of a machined metal ingot, while the use of a side step on the carved sides balances utility with design.

The rear end design is dominated by a large and bold hexagon shape, again exuding the impression of being machined from solid metal ingot to emphasize robustness and strength. The T-shaped tail lamp shared the same design pattern used on the front end, as do the rear bumpers.

Inside, a horizontal instrument panel and clean, functional design make operating the Mitsubishi MI-TECH easier and more pleasurable for the driver. Keyboard-shaped switches are positioned atop a centre console, and the front handgrip also functions as a hand pad to make the switches easy to operate. Functions are presented in a straightforward manner, easy to understand just by seeing them and with a reassuring feel when pressed. The horizontal theme is further accentuated by copper lines added on the instrument panel and steering wheel. For extra peace of mind, the front windscreen presents all the relevant information in graphics such as vehicle behaviour, terrain recognition and optimal route guidance.

The power generator in the new PHEV drivetrain is a lightweight, compact gas turbine engine-generator in place of the traditional petrol engine. As environmental awareness grows and downsizing progresses, the concept explores the technological proposition of plugging the PHEV drivetrain into a small SUV. The gas turbine engine-generator has a powerful output for its size and weight and another benefit of the gas turbine is its flexibility to run on a variety of fuels such as diesel, kerosene and alcohol which can be selected depending on the regions. Further, its exhaust is clean so it responds to environmental and energy issues.

When driving off-road and two of the wheels lose traction, the ability to transmit the optimal driving force to all four wheels makes it possible to transmit force to the two wheels still on the ground and keep driving. MMC has thus delivered a safe, exhilarating driving experience in which the driver feels with the vehicle in all conditions, either in daily driving or when traversing rough roads, while also allowing for thrilling new driving experiences such as 180-degree spins by counter-rotating the left and right tyres.

Equipped also with MI-PILOT, next-generation driver assistance technology, the concept car extends driver support not only on freeways and ordinary roads but also on unpaved roads.

The SUPER HEIGHT K-WAGON CONCEPT is a next-generation super height Kei wagon that caters to drivers who want to go more places and cover longer distances. Offering the wide-open passenger space of a super-height Kei wagon, it delivers the performance and functionality required in that vehicle category but with a design that expresses the unique flavour of MMC’s SUVs.

MMC’s Dynamic Shield front design concept was used for the front end, with a coated steel bar perpendicular to a horizontally-themed grille.

Its side view exudes power, with a cabin silhouette that utilises a long wheelbase and sculpted active character lines. At the same time, the side sill garnish and wheel arches were made black to accentuate the character and uniqueness of an SUV.

Designed with a colour scheme to evoke the personality of drivers who want to be active outdoors, its body colour is a two-tone combination of olive green and white, with the silver roof rails. The wheels incorporate the same colours as the body, producing an all-around unified appearance.

Inside, passenger space was maximised in the back seats in particular with family use in mind. With the largest rear door opening and back seat legroom in its class, passengers have plenty of space to relax. It’s chic, premium interior uses brown as a main theme, with orange appearing ubiquitously as a secondary colour. Synthetic leather is covered with diamond quilting for the seats to create a high-quality feel.

Incorporating the e-Assist preventive safety technology package (which includes MI-PILOT single-lane driver assistance on highways, a braking system that mitigates damage from collisions and collision prevention assistance for pedal misapplication) the Mitsubishi SUPER HEIGHT K-WAGON CONCEPT qualifies for Support Car S Wide safety classification by the Japanese government, thereby easing the burden on the driver while providing safety and peace of mind to all passengers.