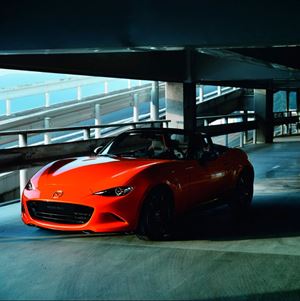 After 30 years and more than 1 million units sold, Mazda feels that the MX-5 has grown into more than simply its own creation. It now belongs to the fans around the world who have supported the development of the model. To express its gratitude and the high hopes Mazda has for the future of the MX-5, the company developed Racing Orange for the new limited edition, an exclusive body colour that evokes the breaking dawn of an exciting new day.

In addition to Racing Orange, the MX-5 30th Anniversary Edition features forged aluminium wheels (Rays ZE40 RS30) developed exclusively for the MX-5 in cooperation with Rays Co., Ltd. and a 30th anniversary badge displaying the model’s serial number. Sales will be limited to 3,000 units worldwide including both the soft-top and RF retractable hardtop models.

Commenting on the launch of 30th Anniversary MX-5, Mazda Motors UK Managing Director, Jeremy Thomson, said: “in the three decades since the launch of the original model over 130,000 Mazda MX-5s have been sold in the UK. This is a sports car that has resonated with enthusiastic British drivers ever since its debut and four generations on it’s as popular as ever. Along the way, it has remained true to the original principle of being an affordable, lightweight and above all fun-to-drive roadster. Today it is the very essence of the Jinba Ittai driver-and-car-as-one philosophy that goes into every Mazda.”

Adding, “and with its unique detailing, generous equipment levels, exclusivity and bold Racing Orange paint, the 30th Anniversary Edition is the perfect way to celebrate three decades of this iconic sports car”.

First unveiled at the 1989 Chicago Auto Show, the MX-5 was an immediate success. Three decades and four generations on, it still dominates the roadster market. Along the way, the two-seater has always remained true to the original principle of an affordable, lightweight and above all fun-to-drive roadster. And the essence of the Jinba Ittai driver-and-car-as-one philosophy that goes into all Mazda models today.

As with all 2.0-litre 2019 Mazda MX-5 models, the 30th Anniversary features the new 184ps version of the Skyactiv-G engine, while across both body types this range-topping special edition comes with a six-speed manual gearbox, Bilstein dampers, strut-brace and limited slip differential. Available to order now.