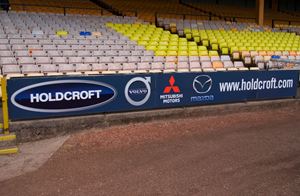 The teams at Holdcroft Mitsubishi, Mazda and Volvo will be working together to create a number of strategies and initiatives, with the ‘Goal’ of putting Port Vale fans, together with the surrounding community, at the heart of local business initiatives - further details to be announced.

The partnership will bring together a professional football club, based in Burslem, Stoke-on-Trent with one of the largest & fastest-growing family owned car business in the UK.

"We are delighted to join forces with Port Vale Football Club. From the Holdcroft Motors Group prospective, it has always been our aim to support our local community, who in turn have supported us since our inception in 1966. We look forward to ‘topping the league’ together!"

“For months now we here at Port Vale have been trying to form a partnership with a motoring group and we are absolutely delighted that we have shaken hands with Holdcroft. We not only wanted to strike a deal between ourselves, but to also support the local community and economy which is paramount to Port Vale Football Club. We look forward to the start of a new season, and a budding partnership."

We look forward to working with Port Vale Football Club over the next year.